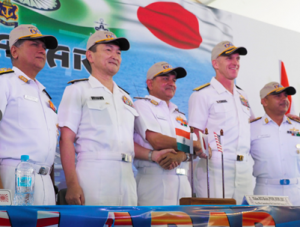 All papers reported that a trilateral exercise involving the navies of the U.S., India, and Japan started yesterday in the Indian Ocean, noting that the Malabar naval exercise is intended to hold China’s maritime push in the region and the South China Sea in check. Some 16 warships, including the USS Nimitz and MSDF helicopter destroyer Hyuga, as well as two submarines and more than 90 airplanes, are expected to take part in various training exercises at sea. MSDF Deputy Chief of Staff Yamaura said: “Maintaining stability in the Indian Ocean serves the interests of the three countries…. The most important goal of the exercise is to enhance cooperation with the U.S. and India.” Asahi added that the three navies are wary of active submarine operations conducted by the PLA in the Indian Ocean in recent years.