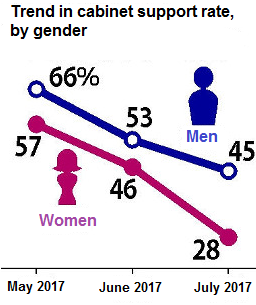 The Yomiuri Shimbun nationwide public opinion poll [conducted on July 7–9] revealed an accelerating decline in support for Prime Minister Shinzo Abe among pollees regardless of gender or age group.

Over a period of about five months, the cabinet support rate has dropped 30 percentage points from this year’s high of 66% posted in February. Support has also fallen by 25 points since the May poll. Such a plummet in the support rate over a two-month period stands on a par with that experienced by the Aso cabinet in 2008 when the support rate dropped from 46% in October to 21% in December.

The recent poll showed women are taking a harsh view of the cabinet. Support among women dropped 18 points from the previous poll conducted in June to hit 28%. The support rate even among full-time homemakers dropped 18 points and reached 27%. The cabinet support rate among men has been comparatively high to date. In the previous poll, male supporters outnumbered nonsupporters, 53% to 40%. This time, however, male supporters (45%) and nonsupporters (46%) were essentially equal.

Distrust of the administration lies behind the increasing shift away from Abe.

Some 68% of all respondents said that the Abe cabinet “has become complacent as it has been in power a long time.” Some 54% of cabinet supporters and 63% of LDP supporters said this as well.

The LDP suffered a historic loss in the Tokyo Metropolitan Assembly election [on July 2]. Some 65% of respondents said that this election result was good. Over half of both cabinet supporters (54%) and LDP supporters (54%) thought this as well.

[Polling methodology: The nationwide survey was conducted July 7–9 on a computer-aided random digit dialing (RDD) basis and targeted voters age 18 or over with calls placed to landline and mobile phone numbers. (Landline numbers in those areas of Fukuoka and Oita Prefectures that suffered damage from the torrential rains were removed from the survey pool.) Valid responses were received from a total of 1,088 persons, including 547 persons (out of the 910 households with one or more eligible voters) for landline numbers and 541 persons (out of the 1,295 persons who answered) for mobile numbers. The valid response rates were 60% for landline numbers and 42% for mobile numbers.]