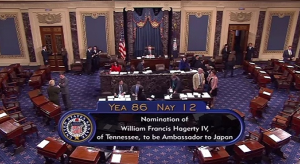 Jiji Press reported from Washington that the U.S. Senate approved by a majority on Thursday the appointment of William Hagerty as the next U.S. Ambassador to Japan. Jiji said Hagerty is expected to arrive in Japan as the successor to Ambassador Kennedy sometime in August. According to Jiji, Senate Committee on Foreign Relations Chairman Corker said Hagerty is “one of the most outstanding people the President has appointed as ambassador” and “there is no one who is more appropriate for this important post than him.” Jiji added that DOS Japan Desk chief Joseph Young is expected to succeed Jason Hyland as deputy chief of mission in mid-August. NHK, TBS, Asahi, and Kyodo News filed similar online stories.