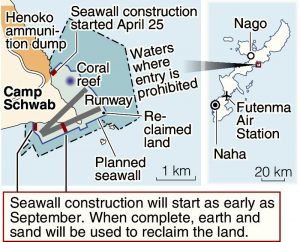 Saturday morning’s Yomiuri front-paged a report saying that the GOJ plans to start new seawall construction in the southwestern area of the landfill site off the coast of Henoko in September or later in preparation for pouring earth and sand into the water next summer. The GOJ claims that seawall work in the planned area does not require Governor Onaga’s approval because there is not much coral in the area. The government first started seawall construction in the northern area of the landfill site where there is a lot of coral in late April, but temporarily suspended the work in early July because of the possibility of the work damaging the coral. In order to resume the seawall work in the area, it is necessary for the central government to obtain special permission from the Okinawa governor, but the governor has expressed his intention to block the work by withholding approval.