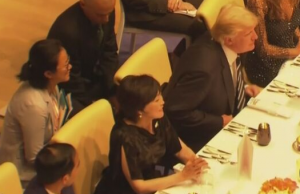 NHK reported this morning that President Trump, who was seated next to Prime Minister Abe’s wife Akie during the G20 summit dinner earlier this month, told The New York Times in an interview that Mrs. Abe does not speak English. The President reportedly said: “I was seated next to the wife of Prime Minister Abe…and she’s a terrific woman but doesn’t speak English.” When asked whether she speaks any English at all, the President reportedly said: “Like, not ‘hello’….It would have been tough without an interpreter.” The network said U.S. media questioned the President’s remarks, pointing out that Akie Abe delivered a speech in English in New York in 2014. The network added that some media are speculating that she pretended not to understand English in order to avoid having a conversation with President Trump. Commercial networks, as well as Nikkei, Sankei, Asahi, and Mainichi carried similar stories.