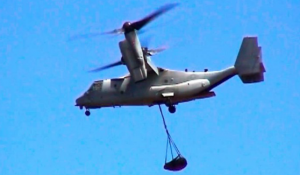 Okinawa Times front-paged a report on external lift training conducted by the U.S. military at Camp Hansen in Okinawa on Thursday morning. The paper wrote that according to local residents who witnessed the drill, what appeared to be supplies were hanging from one of the two Ospreys involved in the drill. The aircraft flew from the northern side of Camp Hansen to Landing Zone Falcon and circled the area at a low altitude for about one hour. This was the first time for the U.S. military to conduct such a drill since a U.S. military helicopter accidentally dropped some of the tires it was carrying on a residential area during training in March. The local residents are becoming increasingly concerned there might be another incident involving external lift training. Ryukyu Shimpo ran a similar inside-page report.