Asked if men are treated better at the workplace than women, almost half of women said yes, markedly higher than the percentage of men giving that response. These were the findings of a joint survey conducted by University of Tokyo Associate Professor Jun Nakahara (human development studies) and Tohmatsu Innovation (Tokyo), a human resources development company. Women responded less positively than men to a question about desire for promotion.

“Even though women are highly motivated to work, it may be that they give up on being promoted because the workplace environment is not good,” points out Associate Professor Nakahara. “Organizations need to proactively address this issue at every level and take steps to eliminate the gender gap in career development.”

The written survey was taken from September through December last year of 1,300 male and 1,015 female company employees who are in working-level positions and not in managerial or leadership posts. The survey findings were released on July 20.

Some 45% of women and 31% of men said that men are treated better in evaluations and the daily allocation of work. Asked if they have a superior who will give them opportunities to gain the knowledge and skills needed for advancement, 29% of women said no compared to 23% of men who gave that answer.

Some 57% of men said “they want to be promoted” whereas only 48% of women gave that answer, 9 percentage points lower. 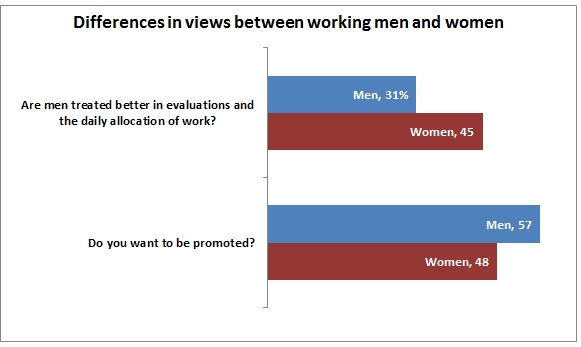