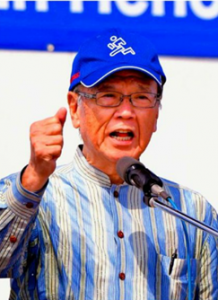 Sunday’s Ryukyu Shimpo and Okinawa Times reported heavily on an anti-U.S. military rally held at a sports stadium in Naha City on Saturday, noting that the participants voiced strong support for Governor Onaga, who vowed to derail the FRF construction plan off Camp Schwab at all costs. The attendees, who numbered 45,000 according to the organizer, adopted a special motion calling for the U.S. military and the GOJ to suspend Osprey flights, shut down MCAS Futenma, and discontinue parachute drop drills and other training in the island prefecture. In his remarks on the Defense Ministry’s endorsement of the resumption of Osprey flights, the governor strongly criticized the GOJ for blindly following the U.S.