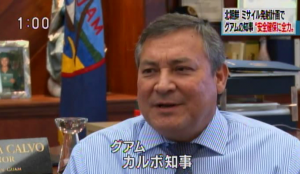 NHK reported this afternoon that Guam Governor Calvo told the network today that in response to North Korea’s claim that it is mulling a plan to launch mid-range ballistic missiles toward Guam, he will make an all-out effort to ensure safety in the event of a contingency. The governor also reportedly said: “Our homeland security agency has been working in collaboration with not only American military forces but also our friends and allies such as Japan and South Korea.” The governor reportedly said he talked to President Trump over the phone last week and was told that “everything is under control” and that “Guam is safe — not 100%, but 1,000% safe.” Meanwhile, the network said Governor Calvo expressed concern about the possibility of the situation having a serious impact on Guam’s tourism industry by saying: “If North Korea continues to make a fuss about waging a war, no one will spend their vacation here.” He also reportedly stressed that the leaders of all nations must work together to persuade North Korea to give up plans for a missile launch.