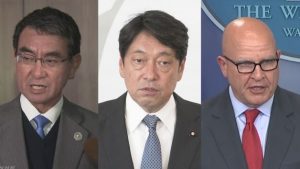 NHK reported at noon that visiting Foreign Minister Kono and Defense Minister Onodera met with National Security Adviser McMaster in Washington on Wednesday ahead of the planned “2+2” meeting on Thursday evening. According to the network, FM Kono pointed out during the meeting that the roles of China and Russia, including in implementing UNSC resolutions, will become more important from the viewpoint of deterring North Korea from staging more provocations. DM Onodera reportedly stressed the need to avoid contingencies and for the U.S. and Japan to work closely to be fully prepared. He also expressed hope to establish close communication at all levels. The network said the three officials agreed that the two nations will work together closely and make careful preparations in order to avoid any contingencies and also agreed on the importance of full implementation of the new UNSC sanctions resolution, which was also endorsed by China and Russia, in order to increase international pressure on the North.

Meanwhile, the network also quoted DM Onodera as telling reporters in Washington: “It is important to stop North Korea’s menacing behavior through diplomatic efforts. In order to do so, we need various types of sanctions, particularly economic pressure and various kinds of international pressure. North Korea is an unpredictable country, and we would like to be fully prepared.”