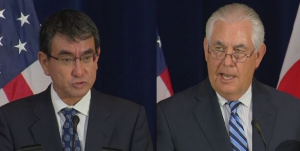 NHK reported at noon on a meeting between visiting Foreign Minister Kono and Secretary of State Tillerson in Washington, during which they agreed that the first visit to Japan by President Trump, which is rumored to be in November, is important in order to demonstrate the robust bilateral alliance. They also reportedly agreed to make thorough preparations to that end. According to the network, FM Kono told the Secretary: “We place importance on President Trump’s first visit to Japan which would demonstrate the unwavering U.S.-Japan alliance at home and abroad.”

In addition, the network said FM Kono told the Secretary that he expects that the U.S. will take positive measures on the Comprehensive Nuclear-Test-Ban Treaty (CTBT), including its early ratification, adding that there was reportedly no response from the Secretary. Yomiuri also reported online on Kono’s remarks, saying it is rare for a foreign minister of Japan, which relies on the U.S. nuclear umbrella, to directly call on  a U.S. Secretary of State to pursue nuclear disarmament.