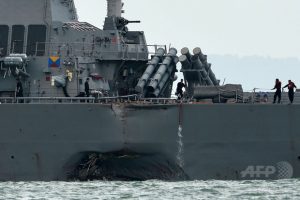 All Tuesday papers reported on the collision between the USS McCain and a Liberian-flagged tanker off Singapore on Monday morning, saying that the Chief of Naval Operations, Adm. Richardson, ordered a rare operational pause across the entire U.S. Navy to ensure safety training and maintenance of the vessels given that this was the second serious mishap involving the Navy’s 7th Fleet in two months following the collision of the USS Fitzgerald in late June. The pause is a one-day safety stand-down.

Yomiuri said Japanese defense officials are alarmed by the collision involving the McCain given that 7th fleet warships have been mobilized heavily for monitoring possible North Korean ballistic missile launches in coordination with the MSDF. According to the article, two of the seven Yokosuka-based destroyers equipped with anti-missile radar are no longer available for an extended period. MOD officials expressed qualms about the possible emergence of a “loophole” in the joint early/warning and surveillance mission against North Korea.

Nikkei said the 7th fleet has taken on greater responsibilities due to China’s militarization of the South China Sea and North Korea’s ceaseless provocations, speculating that the U.S. Navy in the Pacific may be “exhausted” from the excessive workload. The daily expressed concern about a possible decline in the U.S. naval presence in East Asia, wondering if Beijing, Pyongyang, and Moscow are perhaps pleased with the USN’s “unforced errors.”

Sankei said the latest incident was the fourth mishap this year involving Yokosuka-based Navy ships, noting that some U.S. experts, including Sen. McCain, have insisted that drastic cuts in the defense budget under the previous Obama administration have crippled the Navy’s operational readiness. While President Trump plans to commit hefty spending to revive a “strong navy,” the paper said it may take some time before the Navy will actually be able to rebuild a robust fleet due in part to the tight ship construction schedule.