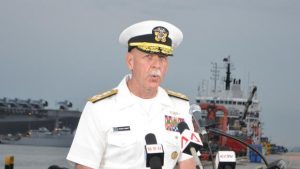 All papers wrote that concerning the USS John S. McCain’s collision with a tanker off Singapore on Monday, Adm. Scott Swift, the U.S. Pacific Fleet commander, told reporters on Tuesday in Singapore that divers recovered several bodies inside the destroyer and the Navy is investigating whether they are the bodies of the 10 missing crew members. Another body was recovered by the Malaysian navy. The admiral said that the Navy will conduct a thorough investigation into the collision. Noting that the collision occurred within two months of one involving another Navy destroyer, the Fitzgerald, off Japan that left seven U.S. sailors dead, and that there were two other accidents involving warships in the region this year, the admiral said that there have been too many accidents and that the Navy will find out whether there is a common cause at the root of these events.