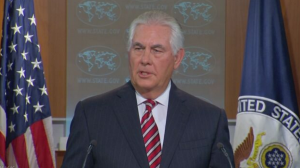 NHK, TBS, and Fuji TV reported at noon that Secretary of State Tillerson held a press conference at the State Department on Tuesday, during which he welcomed the fact that North Korea has not been launching missiles or taking other provocative actions since the latest UNSC sanctions resolution was adopted on August 5. The Secretary reportedly said this is “worth noting.” In addition, the Secretary reportedly expressed the view that North Korea has demonstrated a degree of restraint, stressing: “We hope that this is the beginning of this signal that we’ve been looking for that they are ready to restrain their level of tensions, they’re ready to restrain their provocative acts, and that perhaps we are seeing our pathway to sometime in the near future having some dialogue. We need to see more on their part.” NHK said while applying pressure on North Korea, the Secretary has been expressing the view that the U.S. is ready to hold talks with Pyongyang if it stops engaging in provocations, adding that the Secretary once again urged North Korea to exercise restraint.