In the Nikkei Inc./TV Tokyo telephone poll conducted on Aug. 25–27, the approval rating of Japanese Prime Minister Shinzo Abe’s cabinet rose to 46%, up 4 percentage points from the spot poll conducted on Aug. 3–4 after the cabinet reshuffle. The nonsupport rate dropped 3 points to 46%. The support and nonsupport rates are at the same level. Meanwhile, a government push to do away with overtime pay for specialized professionals and have wages based on performance and not hours worked drew 43% support compared with 35% opposition.

The cabinet’s approval rating had declined steadily since April as public anger grew over a veterinary school scandal and the cover-up involving daily activity records of Japan’s Self-Defense Forces engaged in peacekeeping operations in South Sudan. Support sank to 39% in a late July survey while the disapproval rating shot up to 52%. In hopes of reversing the slide, Abe revamped his cabinet and the ruling Liberal Democratic Party leadership on Aug. 3. Support edged up to 42% in the survey conducted right after the cabinet reshuffling and rose again in the latest survey, suggesting that the recovery trend is holding for now.

The survey was conducted on Aug. 25–27 by Nikkei Research Inc. via random-digit dialing (RDD) to both landlines and mobile phones. It drew 1,044 responses from people aged 18 and older nationwide, for a response rate of 49.0%. 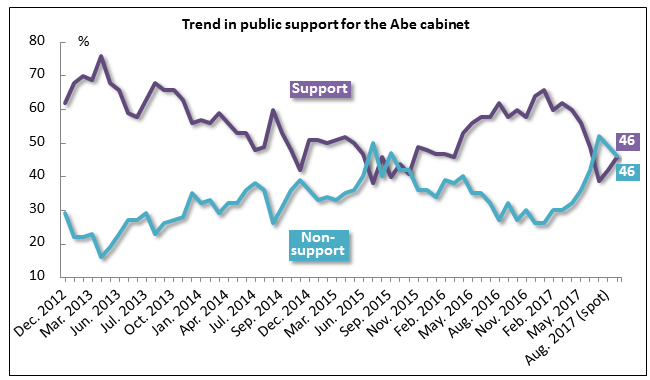