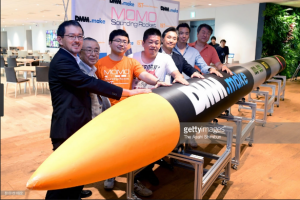 Japan’s civil space business is starting to get off the ground. Last month, a space venture in Hokkaido attempted to launch a miniature rocket. This month, four Japanese companies set up a rocket development company. The global space market is expanding, but Japan’s space business has some challenges ahead. The Mainichi Shimbun looked into the current state of the civil space business in Japan.

Rockets are under maximum pressure at an altitude of 10 km. When Momo reached that altitude, part of the rocket body apparently broke, and this caused a loss of telemetry. The ground staff became unable to control the rocket and so stopped the engine 66 seconds after the launch. From the launch, Interstellar Technologies learned that the engine operated properly. “This launch was an experiment,” said Interstellar CEO Takahiro Inagawa, “The outcome may be unexpected but it is still a gain for us.” The company plans to attempt a second launch within the year.

Space development used to be a national endeavor. The technological revolution in semiconductors, however, has prompted the miniaturization of rockets as well as cost reduction, and this has opened the field to the private sector. Interstellar Technologies anticipates being able to keep a launch under 50 million yen by procuring rocket parts in Akihabara, a discount electronics district in Tokyo.

In contrast, it costs 10 billion yen for the Japan Aerospace Exploration Agency (JAXA) to launch an H2A rocket and the number of launches is limited. Interstellar Technologies sees miniature rockets as a business opportunity. Momo cannot be loaded with a satellite, but the company plans to develop a rocket capable of carrying a 100 kg satellite and with a launch cost of less than 500 million yen. Interstellar Technologies plans to launch the first such rocket by fiscal 2020. “I want to launch many rockets and make the space business commercially viable as soon as possible,” said CEO Horie. “I want to make our miniature rockets like Honda’s popular Super Cub 50 cc motorcycle.” In August, Canon Electronics Inc. and three other companies jointly established “New Generation Small Rocket Development and Planning Co., Ltd.” in Tokyo.

With the miniaturization of satellites, there is growing demand for launching such satellites. According to a U.S. research company, there will be demand for 2,400 microsatellite launches over the next seven years. Axelspace Corporation in Tokyo is planning to launch 50 microsatellites and to begin providing graphic data from 2022.

The company’s business model is to collect satellite observation data and provide it as big data to customers. The satellites will observe forests, farmland, and the transport of cars for import and export at seaports. This in turn could lead to the creation of new businesses, including detecting illegal deforesting and predicting the market price of grains and the earnings forecasts of automobile companies.

Investment by major corporations is key

Infrastructure development in this field also presents challenges. Although two laws related to outer space were enacted in 2016 as part of opening the door to the private sector, the number of miniature rocket launch sites remains limited.

“There are few tie-ups in Japan between major corporations and space ventures,” said Mitsubishi Research Institute Senior Researcher Atsushi Uchida, an expert on the space business. “It is essential for large companies to actively invest in the space industry.” Uchida continued, “Making as many success stories as possible in the private sector will be the key.”