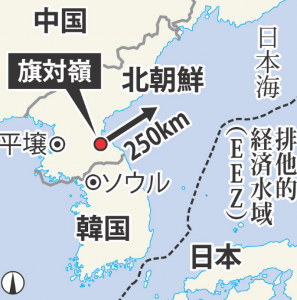 All Saturday evening and Sunday papers reported on North Korea’s launch of three short-range missiles early Saturday morning. According to PACOM, the missiles were fired between 6:49 a.m. and 7:19 a.m. toward the Sea of Japan from the eastern province of Gangwon. Two of them flew about 250 km on a northeastern trajectory and the third one appeared to have blown up almost immediately after the launch. This was North Korea’s first missile launch in 29 days. The papers speculated that the DPRK fired the missiles in response to the ongoing U.S.-ROK joint exercise Ulchi Freedom Guardian and to mark the anniversary of the start of military-first policy on Aug. 25.

However, Mainichi and Nikkei reported on Monday morning that South Korea’s Yonhap News Agency said on Sunday that the ROK government issued a comment on Saturday saying that the projectiles may have been artillery rockets fired from a 300-mm-caliber multiple-rocket launcher. But on Sunday an ROK government source was quoted as saying that the projectiles probably were a new type of missile, given that they apparently flew at an altitude of 50 km, which is lower than the altitude of a short-range ballistic missile.

Asahi wrote that the fact that North Korea fired only short-range missiles, not an ICBM or a mid-range missile, may indicate that it exercised “restraint.” The paper wrote that according to White House Press Secretary Sanders, President Trump was briefed on the missile launches and that the administration is monitoring the situation. However, the U.S. did not issue a statement condemning North Korea. Mainichi wrote that the DPRK did not fire a ballistic missile toward Guam in order not to overly provoke the U.S. Yomiuri conjectured that the DPRK intentionally lowered “the level of provocation” by firing short-range missiles in order to avoid an inevitable confrontation with the U.S. The paper wrote that the Trump administration is reacting calmly to the missile launches and watching closely for any possible escalation of North Korean provocations. Nikkei wrote that the latest missile launches poured cold water on recent U.S. expressions of a readiness for dialogue.

Monday’s Mainichi and Sankei wrote that Secretary of State Tillerson said during a Fox News program on Sunday that the firing of the short-range missiles is a violation of UN Security Council resolutions and a provocation directed at the United States and its allies. The Secretary added that the U.S. will continue a “peaceful pressure campaign” against North Korea by working with its allies and China.

Chief Cabinet Secretary Suga told reporters that the missiles did not fall within Japan’s territory or exclusive economic zone and did not have a direct impact on Japan’s security. According to Suga, Prime Minster Abe instructed him to remain on a high level of alert to protect the lives and property of the Japanese people. Defense Minister Onodera told reporters that Japan will continue monitoring moves by North Korea and maintain a high level of alert in close coordination with the U.S. and South Korea.