Creatures of the abyss 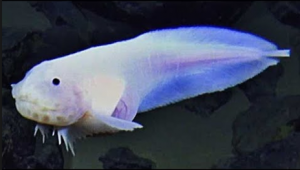 Sunday’s “NHK Special” took up scientists’ exploration of the Mariana Trench in the western Pacific, which is the Earth’s deepest abyss, to unravel the mystery of deep seawater fish. A ghostly white fish called the Mariana snailfish was filmed at a depth of 8,178 meters. The show delved into how these creatures can withstand pulverizing hydrostatic pressure at great ocean depths, speculating that high levels of trimethylamine oxide (TMAO) and scyllo-inositol, organic molecules in their cells, may hold the key to making these fish “pressure-resistant” by giving the proteins more space and preventing water from being forced into the interiors of the proteins and distorting them.