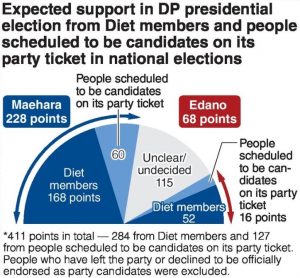 In the presidential election to be held on Friday for the opposition Democratic Party, former Foreign Minister Seiji Maehara has the support of about 50 percent of the 127 people scheduled to be candidates on the party ticket in national elections.

This puts Maehara in the lead over former Chief Cabinet Secretary Yukio Edano, who is backed by a little more than 10 percent of the scheduled candidates, according to a Yomiuri Shimbun survey.

Maehara also has greater support among the secretaries general of the DP’s prefectural chapters, a possible indicator of local votes.

Whether Edano can rally from this disadvantageous position will be a focal point in the rest of the election campaign.

Based on the survey results and other information collected by Yomiuri reporters, Maehara has the support of 60 people scheduled to be candidates on the party ticket in national elections, almost half of the total. Edano has the support of 16. Fifty-one had yet to clarify whom they support.

As influential local assembly members often act as secretaries general of the party prefectural chapters, their positions could influence the votes of local assembly members, and of rank-and-file party members and party supporters. Votes from these three categories account for more than half the overall total.

Among the reasons given for supporting Maehara, his attitude toward reviewing cooperation with the Japanese Communist Party stood out. Among those who supported Edano, there were no scheduled candidates in national elections, nor secretaries general of the party’s prefectural chapters who showed a positive stance toward reviewing the cooperation.

Among 142 Diet members as of Saturday, Maehara had expanded his support to 84 from 72 in the initial stage of the campaign. Edano’s support increased by one to 26.