In the Nikkei Inc./TV Tokyo telephone poll [conducted on Aug. 25–27], independent voters and women remained dissatisfied with Abe. The overall approval rating of Japanese Prime Minister Shinzo Abe’s cabinet rose to 46%, but only 19% of non-affiliated voters said they support the cabinet. By gender, only 40% of women approved of the cabinet, while the rate of approval among men rose to 51%. This suggests that the erosion in Abe’s popularity triggered by a spate of scandals may not have run its course. When asked whether they would like Prime Minister Abe to win a third term as the Liberal Democratic Party (LDP) president in the party leadership race in September 2018, more than 50% said no.

The support rate among women is lower than that among men. The change in sentiment is more pronounced among men, rising 5 points in the newest survey to 51%. Among women, support remained roughly unchanged at 40% compared to 38% in the previous poll conducted on Aug. 3–4.

The poor results among women and independents make it difficult to judge whether the decline in Abe’s support has ended. The sudden decline in public support was triggered by issues related to Kake Educational Institution and the daily logs regarding the Self-Defense Forces’ participation in UN peacekeeping operations in South Sudan. With the Diet currently in recess, the public’s interest in politics might simply have waned, leading to a lull.

Many within the ruling party worry that support could resume its slide as long as independents continue to be dissatisfied. A civic group now insists that the veterinary school at the center of the scandal gave a grossly overestimated construction figure to receive a hefty subsidy, providing the opposition more ammunition. The opposition parties are ready to bring up the Kake issue at the extraordinary session which will start at the end of September. It is anticipated that the newly appointed cabinet members will be subjected to fierce interrogation at the first debate after the cabinet reshuffle. Top officials in the ruling parties are concerned that “the extraordinary session may be tough from the start.”

A decline in the cabinet support will lead to strong criticism of the Abe administration, which has been in office for a long time. More respondents were opposed to Prime Minister Abe having a third term as LDP president than were in favor, 52% to 40%. Meanwhile, 65% of independents and 30% of LDP supporters were opposed to another term for Abe. In a poll conducted in February, respondents in favor of a third term for Abe as LDP president, easily outdistanced those opposed, 63% to 28%.

On Aug. 27, Komeito leader Natsuo Yamaguchi said to the Nikkei: “For the cabinet support rate to recover further, the cabinet ministers need to be well prepared for the extraordinary session of the Diet this autumn. It will also be critical that we achieve results in foreign affairs.” It looks like the challenge for the Abe administration for the foreseeable future is how to regain the support of independents and women.

[Polling methodology: The survey was conducted on Aug. 25–27 by Nikkei Research Inc. via random-digit dialing (RDD) to both landlines and mobile phones. It drew 1,044 responses from people aged 18 and older nationwide, for a response rate of 49.0%.] 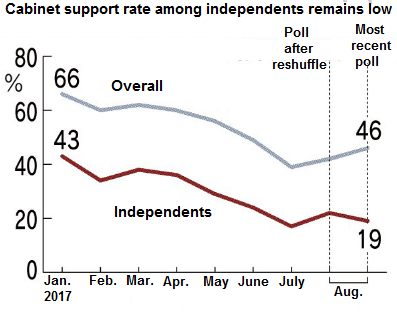 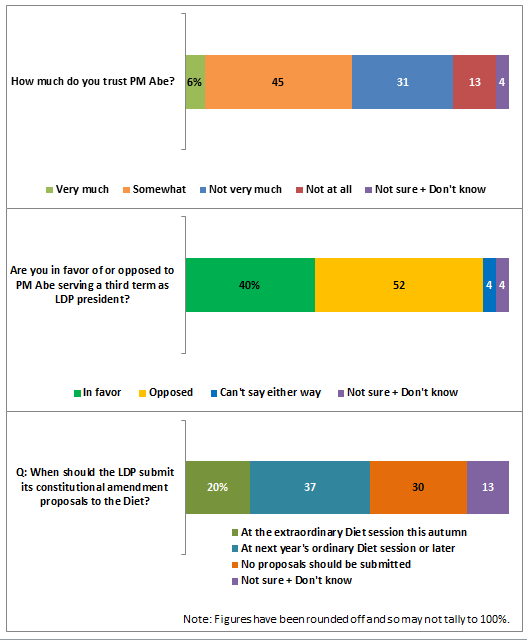