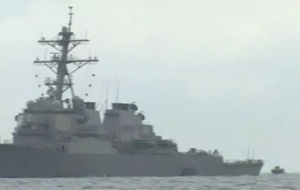 NHK reported on the U.S. Navy’s announcement on Monday that all 10 missing crew members of the USS McCain have been confirmed dead, saying that the victims were sailors aged 20 to 39 specialized in electronics and communications. The broadcaster mentioned a growing consensus among U.S. experts that behind the series of mishaps involving 7th fleet vessels this year lay the frequent extended missions for which U.S. navy ships have been mobilized to counter North Korea’s relentless provocations and China’s aggressive operations in the South and East China Seas.