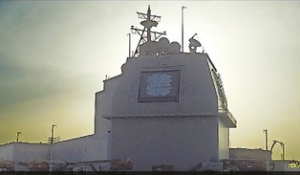 In order to counter ballistic missile launches by North Korea, the Defense Ministry has begun taking new measures for interception. The ministry plans to procure from the U.S. the “Aegis Ashore” system, a land-based missile interception system. If the procurement is realized, it will be the third instance of deploying the Aegis Ashore in the world. Intercepting ballistic missiles entails technical difficulties and huge costs, and will spark protests from neighboring countries.

Japanese defense officials generally welcome the introduction of Aegis Ashore, because the system will help lighten the current heavy burden on the Maritime Self-Defense Force (MSDF), which has been responding to North Korea’s missile launches.

Two Aegis ashore systems capable of covering all of Japan

In accord with a missile shoot-down order, the SDF remains on high alert. The MSDF has four Aegis destroyers equipped with SM-3 interceptor missiles. To cover all of Japan, three of the four Aegis ships must be continuously on station in the Sea of Japan. Former MSDF Kure Regional District Commander Toshiyuki Ito, now a professor at Tranomon Graduate School of Kanazawa Institute of Technology, says that due to continuous operations, MSDF members do not get the necessary sea training, which “prevents them from improving their skills.”

Two Aegis Ashore systems would be able to cover all of Japan, because the system is equipped with the SM-3 Block IIA ballistic missile interceptor capable of covering a wider area than the SM-3. This would ease the current tight schedule for the Aegis destroyers.

The Abe administration continues to increase the defense budget. The government allows an annual increase of up to 0.8% under the current five-year defense build-up program covering from FY2014 to FY2018. However, this requires the Defense Ministry to implement cost reduction through implementing procurement reform. An official of the Finance Ministry said, “If the Defense Ministry spends more for the Ballistic Missile Defense (BMD), it must cut other expenses.”

Even if Japan enhances its BMD capability through the introduction of Aegis Ashore and other steps, in the event that North Korea fires multiple missiles simultaneously, it would be difficult to intercept all of them. Prime Minister Shinzo Abe raised a question at a Diet session in February, saying, “Is shooting down incoming missiles alone enough to defend (Japan)?” The prime minister hinted at the limits of the BMD. It is essential for lawmakers to deliberate the cost effectiveness of Aegis Ashore at Diet sessions.