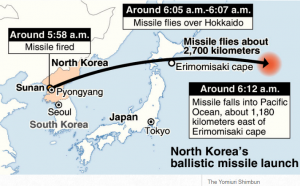 NHK and all commercial networks led with extensive reports on the GOJ’s response to North Korea’s launch of a ballistic missile this morning. Prime Minister Abe spoke by phone with President Trump for about 40 minutes starting at 9:30 a.m. The premier reportedly told the President that the missile, which was fired amid the increasing international pressure including UNSC resolutions and flew over Japan, posed a different level of threat and constitutes an unprecedented provocation. Abe added it is time to step up the pressure on the DPRK because it is obvious that Pyongyang is not prepared for dialogue, and that Japan supports the United States’ position of putting all options on the table. The broadcasters said that President Trump responded that America stands one hundred percent with its ally Japan. According to the networks, the two leaders agreed to apply further pressure on North Korea to urge it to abandon its nuclear and ballistic missile programs and ask the UN Security Council to swiftly convene an emergency meeting. Abe told reporters afterward that the GOJ will make utmost efforts to protect the lives and property of the Japanese people under the strong alliance with the U.S. He added that Japan will urge North Korea to alter its policy by applying strong pressure in cooperation with the international community, including the U.S., South Korea, China, and Russia.

TBS reported that the DOD announced an hour after the missile launch that the projectile flew over Japan, but since then has announced no further information, including the type of missile or the length of the flight. A Washington correspondent commented that Pyongyang is apparently taking advantage of the reluctance of China and Russia to impose economic sanctions and the Trump administration’s preoccupation with the hurricane disaster in Texas.

NHK added in its online report that Chief Cabinet Secretary Suga commented on the teleconference between President Trump and Prime Minister Abe during a news briefing this morning by saying that it is significant that the leaders of the U.S. and Japan demonstrated the robust alliance between the two nations by holding an in-depth discussion immediately after the provocative act by North Korea. The network added that Foreign Minister Kono also spoke by phone with Secretary of State Tillerson at around 9:00 a.m. and confirmed that the U.S. and Japan will work closely to apply pressure on North Korea. The two officials also confirmed the procedure for requesting an emergency UNSC meeting.