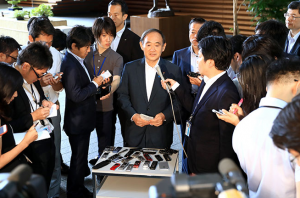 CCS Suga speaks to the press

The following is the gist of the remarks made by Chief Cabinet Secretary Yoshihide Suga at the second emergency press conference held on the morning of Aug. 29 following North Korea’s missile launch.

It is estimated that North Korea fired a ballistic missile at around 5:58 a.m. on Aug. 29 and it landed in the Pacific Ocean after flying over Cape Erimo, Hokkaido. No damage to aircraft or ships has been reported.

It is also estimated that the missile flew about 2,700 km and reached a maximum altitude of 550 km. The missile may have separated into three parts over the Sea of Japan. The government is now analyzing the type of the missile and other matters.

The Self-Defense Forces did not implement a missile shoot-down order. I decline to comment on whether the government ordered the SDF to shoot down. However, the government is taking thorough measures to ensure the safety and security of the Japanese people.

The latest missile launch poses an unprecedentedly serious and grave threat to Japan’s security and threatens the peace and safety of the Asia-Pacific region. No prior warning was given, and North Korea’s act is extremely problematic in terms of securing the safety of aircraft and ships.

North Korea has ignored the repeated warnings issued by the international community and has gone too far. Its action is totally unacceptable. To have North Korea cease its provocative actions and take concrete measures toward denuclearization, we need to closely cooperate with the relevant countries and increase pressure on North Korea.