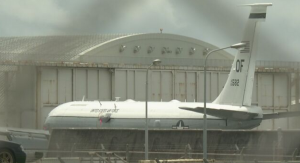 NHK reported on its website that U.S. military officials said that a WC-135 air-sampling aircraft, which is capable of detecting radioactive materials in the atmosphere, arrived at Kadena AB at about 7:30 a.m. this morning. The network said its camera set up near the base captured an aircraft arriving at the base around the same time. The network also said it has been confirmed that an RC–135S Cobra Ball, which can collect optical and electronic data on ballistic targets, took off from the base on Monday. The network speculated that the U.S. military is collecting information in the region following North Korea’s sixth nuclear test on Sunday.