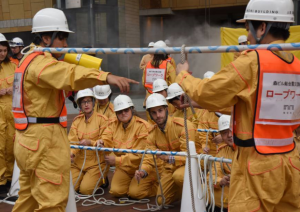 Staff from the U.S. Embassy practice using ropes for rescue operations during an annual disaster drill Friday at the Roppongi Hills complex in Minato Ward, Tokyo.

Marking the anniversary of the 1923 Great Kanto Earthquake on Friday, municipalities nationwide and companies used the opportunity not only to test their preparedness for disasters but also to raise public awareness about a variety of threats including typhoons, floods and a potential North Korean missile attack.

Tokyo Gov. Yuriko Koike, at a news conference the same day, used the occasion to reassure Tokyoites the government is enhancing its safety measures, noting the missile threat is of particular concern.

“Especially in the case of North Korea, we can’t predict its actions,” she said, calling for a greater awareness of such possibilities.

The developer aims to transform one of Tokyo’s landmark buildings into a major disaster center in case of emergency. Roppongi Hills is one of a growing number of high-rise facilities that is being made available as a shelter for those who may be unable to make it home in an emergency.

Mori Building hopes to extend the emergency shelter service through cooperation with nearby real estate operators.

“We are in the midst of discussing how we should prepare our staff, what kind of response is needed and what we should do” in the event of an attack by North Korea, said Masakatsu Yamamoto, Mori Building’s marketing and communications manager. “We are contemplating measures with consideration of a variety of threats.”

Terada said the firm is cooperating with operators of other facilities in the area such as Tokyo Midtown and Sumitomo Realty and Development Co., which are also enhancing their ability to take in evacuees if needed.

“I think it’s important to strengthen our network to upgrade the disaster preparedness in the whole area,” he said.

About 400 Roppongi Hills office workers took part in Friday’s exercise. This year, several employees from the U.S. Embassy, which is also located in Tokyo’s Minato Ward, took part in the drill for the first time as part of a plan to support non-Japanese evacuees.

Given the area, home to many foreign residents and embassies, attracts many tourists from overseas, the staffers are prepared to provide assistance in four languages: English, Japanese, Korean and Chinese.

“As members of Roppongi Hills, which is aspiring to become the area’s primary prevention center, we need to have adequate knowledge to act appropriately if something happens,” 27-year-old Yu Yagi, a sales representative for Mori, told The Japan Times. Roppongi Hills is capable of accommodating some 5,000 evacuees and has a stock of roughly 100,000 meals as well as milk for infants, diapers and medicines. The building also has a backup power supply, which should support evacuees for three days.

On Aug. 25, luxury shopping complex Ginza Six, which opened in April, also conducted its first disaster exercise. The facility is prepared to house and has a stock of meals and blankets for about 3,000 evacuees for three days.

Drills simulating evacuations, fire fighting and rescue operations were also held in many parts of the country.

Only three days after a ballistic missile fired by North Korea flew over Japan, the city of Takikawa in Hokkaido and the city of Tsugaru in Aomori Prefecture issued practice alerts on Friday, urging residents to seek shelter.

A government-led exercise also conducted Friday was based on a scenario of a magnitude-7.3 earthquake with an intensity of 7 on the Japanese seismic scale striking the capital.

Sept. 1 is designated as Japan’s Disaster Prevention Day, and commemorates victims of the magnitude-7.9 earthquake that hit the Kanto region, including Tokyo, on the same day in 1923, which resulted in the loss of more than 100,000 lives.