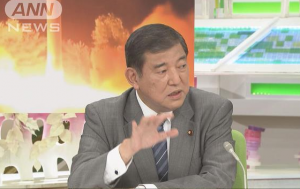 All papers wrote that former Defense Minister Ishiba expressed the view during a TV interview on Wednesday that it is necessary for Japan to discuss the possibility of reviewing its three non-nuclear principles of “not possessing, producing, and introducing nuclear weapons.” Ishiba stated: “I wonder whether it is right for us to insist that we don’t want U.S. nuclear weapons inside our country while relying on the U.S. nuclear umbrella for protection. Allowing U.S. nuclear weapons to be brought into Japan is an ‘emotional’ issue that could spark a strong public reaction. But it is probably necessary for us to discuss whether the current policy is sufficient in view of deterrence.” However, Ishiba expressed opposition to the idea of Japan possessing nuclear weapons, saying: “If Japan, the only country to have suffered atomic bombing, possesses nuclear weapons, it would undermine the NPT regime and prompt other nations in the world to think they could go nuclear.”

However, Chief Cabinet Secretary Suga told a news conference on Wednesday that the GOJ has not discussed the possibility of reviewing its non-nuclear principles and has no plan to review them in the future. Defense Minister Onodera also commented on Ishiba’s remarks by saying that the GOJ has consistently acted within the framework of the principles and that there has been no change in its policy on the matter.