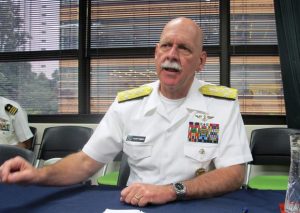 Nikkei reported on its interview on Wednesday in Tokyo with U.S. Pacific Fleet Commander Swift. The paper wrote that the admiral said that North Korean leader Kim Jong Un is not listening to the U.S.’s messages if he thinks the U.S. will not take military action. Adm. Swift also stated that both Secretary of Defense Mattis and President Trump have made it clear that all options are on the table, adding that although it is desirable for the situation to be resolved through diplomacy, military action is part of the diplomatic approach. The Pacific Fleet commander went on to say that if Kim is trying to drive a wedge between the U.S., Japan, and South Korea, his actions are having the opposite effect because the trilateral relations have become closer.