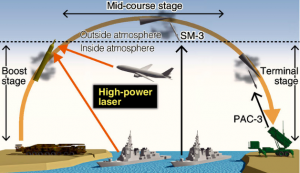 Hitting a ballistic missile with a high-power laser soon after launch could neutralize or destroy it. Recently, North Korea has been firing its missiles on a “lofted trajectory,” making them difficult to intercept with current weapons systems. The new technology is meant to address this weakness.

The system is intended to work by shining a high-power laser, mostly from aircraft or warships, at a ballistic missile immediately after it is launched, in the so-called boost stage. Heat from the laser would then deform the missile.

Cheaper than interceptor missiles, such lasers could possibly be used against multiple ballistic missile attacks, not just those on a lofted trajectory.

The Defense Ministry has requested ¥8.7 billion in its fiscal 2018 budget for research on high-power laser systems to take down mortar rounds, small drones and other such objects.

Basic research on high-power lasers has been under way since fiscal 2010. The government wants to research how to weaponize the technology over five years starting in fiscal 2018.

Since laser systems would be cheaper than interceptor missiles, the ministry eventually wants to incorporate them into its missile defense posture.

Ballistic missiles typically go through three stages during flight. The boost stage, which is immediately after launch, is when the missile accelerates by burning its rocket engines. In the mid-course stage, the missile’s post-burn inertia carries it outside the atmosphere.

In the terminal stage, the warhead reenters the atmosphere and descends toward its target.

However, missiles go to higher altitudes than usual in the lofted trajectory North Korea has used recently, and so are very high during the mid-course stage and descending rapidly during the terminal stage.

Intercepts in such situations are difficult, so if a ballistic missile could be hit with a laser during the boost stage, frictional resistance from the air could neutralize or destroy the missile, such as when it reenters the atmosphere.

Because lasers lose heat over distance and their range is short, one disadvantage of a laser system is that it would have to be fired from an aircraft or warship that is relatively close to the missile launch site. The technology would also have to be accurate enough to continuously hit a ballistic missile flying at high speed.

The United States, China and other countries are also developing laser weapons, and the U.S. military has started deploying them. Because the United States is also considering using lasers for missile defense, the Defense Ministry is receiving information on U.S. research results.