The other eclipse: Nazism recasts its shadow in Japan and the U.S. 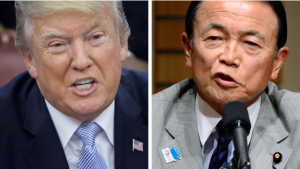 It seems Nazis are the new black. It took two days for U.S. President Donald Trump to belatedly denounce American neo-Nazis and other white supremacists. In Japan, Deputy Prime Minister Taro Aso, voicing admiration for German Nazis (“paleo-Nazis”?), suggested that Adolf Hitler, “who killed millions of people, was no good, even if his motives were right.”

After being criticized for his remarks, Aso later clarified that he regarded Hitler “in extremely negative terms” and believed his “motives were also wrong”; he merely wanted to “stress the importance of politicians achieving results.” This is not the first time Aso has praised Nazis. Four years ago, celebrating Nazi efficiency in passing the Weimar Constitution, he recommended the adoption of similar stealthy methods to pass his party’s revision of Japan’s.

How unfortunate it is that Aso’s statements — past and present — are benignly labeled “gaffes.” The Merriam-Webster Learner’s Dictionary defines a gaffe as an embarrassing “mistake made in a social occasion.” A fart is a gaffe; praising Nazi efficiency is not — it doesn’t just slip out. While both are odorous, the latter is decidedly more serious. Aso’s statements portend something far more sinister, particularly given his history of troubling cerebral flatulence.

Meanwhile, the president, praised by his supporters for “speaking from the heart” when he is not boasting of grabbing other pieces of the anatomy, initially refrains from denouncing by name those who pledge allegiance to “Old Gory” — that is, swastika-emblazoned Nazi flags indelibly stained with the blood of millions of Holocaust victims, including Jews, gays, lesbians, the chronically ill, and physically and mentally disabled people.

This is a man who has issued executive orders for, in his own words, a “Muslim ban”; called for the construction of a wall to protect Americans from Mexicans he has slurred as “rapists and criminals”; accused former President Barack Obama of being a Muslim noncitizen; and signed a directive banning transgender individuals from the military.

Trump, who reportedly kept a book of Hitler’s speeches by his bedside, denounces those who salute that flag only when it has proven politically expedient to do so. This is also the man who once bragged, “I could stand in the middle of Fifth Avenue and shoot somebody and I wouldn’t lose any voters.” Presumably, given the current moral malaise afflicting America’s political leadership, he could also drive a car into a crowd of anti-racist protesters with a similar lack of consequences or, perhaps, emboldened by his latest indiscretion, he will simply pardon the man who committed the crime.

Tragically, this is happening in a nation that, only 8½ years after electing its first black president, was prematurely being touted by racial Panglossians as a postracial Eden whose millennials were no longer burdened by the prejudices of their parents. But memories are short, and in their historical Alzheimer’s, Americans have conveniently forgotten not only that Nazism was not confined to Germany, but also that Nazi race laws and eugenic policies were inspired by America’s Jim Crow laws.

A similar revisionism-fueled amnesia afflicts Japan. Many of my Japanese students seem blissfully oblivious to the fact that Germany and Japan fought on the same side during World War II. It’s a blind spot that the Abe administration presumably does not share, which makes the government’s recent approval of Hitler’s “Mein Kampf” for use in Japanese classrooms all the more concerning.

But it’s difficult to see conspiracy rather than coincidence behind that decision given the fact that Abe’s own struggles — in addition to trying to maintain a veneer of credibility after stonewalling on the Moritomo and Kake Gakuen scandals — have included how to justify his awkward tolerance of (former) government ministers such as Sanae Takaichi and Tomomi Inada, both of whom have been pictured with Kazunari Yamada, leader of the National Socialist Japanese Workers Party, himself a Hitler aficionado.

Still, none of these “gaffes” presented much of an impediment to Abe and his party ramming an “anti-conspiracy” bill through the Diet and his Cabinet approving the teaching of the prewar Imperial Rescript on Education in schools, reactionary measures that are sure to please the nation’s fascist fanboys.

“(Trump’s) critics … have been so harsh that it won’t be difficult for Trump to prove them wrong. Respectable opinion has declared itself so violently against Trump that he’ll be held to a very low standard. Small acts of civility and moderation will seem like remarkable achievements. The view that he’s a far-right racist zealot, a 21st-century Hitler, shouldn’t be hard to refute: He just needs to avoid dressing his supporters in paramilitary uniforms, declaring martial law in the inner cities, and building a network of concentration camps.”

Aside from the fact that Crook himself sets the bar for presidential moral authority dishearteningly low, nothing has proven the harsh assessments of Trump’s critics wrong. Indeed, let’s consider Crook’s tips for Trump point by point:

1) As for the sartorial preferences of Trump’s supporters, some of them, as I have already alluded, prefer polo shirts and khakis, or in the case of “alt-rightist” demagogue Richard Spencer, Brooks Brothers suits and black buckled shoes to brown shirts and jackboots.

3) Trump just pardoned Sheriff Joe Arpaio, a convicted felon who once proudly described his prison in Arizona — where hundreds of inmates were abused and scores died — as his own personal “concentration camp.”

Shaking off the darkness

Interestingly, despite their egregious behavior, none of the aforementioned men on either side of the Pacific is in any real danger of being held accountable for their words and deeds. It is the tacit rule of 21st-century governance, a carryover from the 20th, that those in positions of power seldom face the consequences of their misdeeds, which ensures that, to borrow the title of an Akira Kurosawa classic, “the bad sleep well.”

In the past, these individuals escaped punishment because their indiscretions — sometimes immoral, sometimes criminal — were unknown, concealed from public view or rationalized as necessary to counter some purportedly greater evil, such as communism or civil strife.

Today, they elude it despite or because of the torrential flow of (often contradictory) information in an age dominated by the internet, cable news, click-bait journalism and alternative media. Parts of the latter have spawned both the “alternative right” and the “alternative facts” that sustain it, as well as served to mobilize right-wing extremists who take to the internet like fire ants ready to threaten and intimidate anyone who dares to criticize their clay-footed idols, and to browbeat an increasingly jello/konnyaku-kneed media into tongue-biting acquiescence and journalistic “self-restraint.”

Democracy, as The Washington Post now direly warns, “dies in darkness.” But the repugnant, morally corrosive nature of those who stand ready to kill it has not been cloaked in shadows. In America, it was on display to be discerned by any moderately observant voter or Electoral College elector. In Japan, it was obvious to anyone whose ears perked up at the ultranationalist dog whistles and outright xenophobic chants emanating from a very public resurgent right wing fond of targeting ethnic Korean and Chinese residents with hate-filled invective, whether in big-city rallies or online.

Americans and Japanese face difficult challenges and even more difficult

choices. Both countries are threatened by a rising tide of right-wing nationalism, racism and xenophobia. The question is how they will respond to these threats.

One answer lies in an energized public ready to face the darkness squarely and demand that those in power be held accountable for their actions. In Japan, that demands both citizens and foreign residents shake off the feelings of impotence, apathy and despair that the opaque political system here seems to foster and taking a stand. Another answer is a vigilant media that eschews “churnalism” and catchup reporting and relentlessly seeks the truth regardless of the intimidation and potential loss of access to political insiders it will face as a consequence. It remains to be seen, however, if any of these responses will be enough.

Unfortunately, unlike the solar eclipse that recently swept across America, the darkness that has descended upon both countries promises to last for years, not minutes.