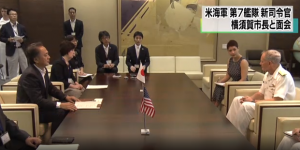 NHK reported that Vice Adm. Phillip Sawyer, the new commander of the U.S. 7th Fleet, visited Yokosuka City Mayor Ueji at Yokosuka City Hall this morning. The network said Vice Adm. Sawyer assumed the post after his predecessor was dismissed following a series of incidents involving Aegis-equipped vessels this year. The network said Mayor Ueji expressed his condolences for the victims of the collision between USS Fitzgerald and a container vessel in waters off Shizuoka and expressed hope that vessels deployed at Yokosuka will be operated in a safe and stable manner. Adm. Sawyer reportedly responded: “We are faced with a major challenge today. The operation of vessels must be safe and stable. We are keenly aware that we need to rectify whatever needs to be rectified.”