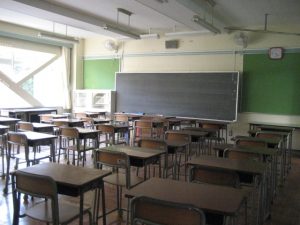 Some students in Japan apparently find it extremely hard to return to school after the summer holidays. According to a 2015 government white paper on suicide that examined 42 years’ worth of data, more people under the age of 18 commit suicide on Sept. 1 than any other day of the year. While the overall number of suicides has been steadily dropping in Japan since it peaked in 2003 at 34,427, the number of youth suicides has stayed relatively stable at around 300 over the last ten years. The stress levels of some children may rise at this time due to the emotional pressure of returning to school, which requires them to readjust to school life after a long break from academic responsibilities and schoolyard bullies.

Government authorities have stepped up their vigilance by taking such measures as setting up a 24-hour telephone counseling service that children and parents can call for assistance. At a news conference on Sept. 1, Education Minister Yoshimasa Hayashi issued the following message to children worried about going back to school: “You are not alone. Talk to someone about your problems: your family, teachers, friends — anyone. One of them will help you. If it’s difficult to talk to people around you, call the ministry’s 24-hour SOS dial.” NPOs and other organizations are also trying to reach out to at-risk children worried about going back to school to prevent them from committing suicide. Quasi-governmental broadcaster NHK launched a Twitter campaign called “On the night of Aug. 31” to draw public attention to the problem. Popular actress Shoko Nakagawa posted the message saying “Never die. Live” on Twitter. Naoki Ogi, a well-known educator and TV personality, also posted a tweet saying: “If you feel like school isn’t a safe place, you don’t have to go there.” 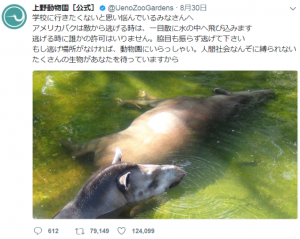 Ogi’s idea has been shared by others. On Aug. 30 Tokyo’s Ueno Zoo offered refuge to children who felt nervous about returning to school, saying on Twitter that kids should be allowed to skip school if they don’t want to go. Showing a photo of tapirs swimming in a pond, the zoo said that frightened children can run away without asking for permission just like animals do when they’re confronted with danger. “If there’s no place to escape, come to the zoo,” said the message. “Animals who are free from the rules of human society are waiting for you.” This post has been retweeted more than 79,000 times and liked by more than 124,000 people. Kamakura City Library made a similar offer two years ago. It said on its Twitter account on Aug. 26, 2015: “Come to the library if you are afraid to go to school. We have plenty of books for you and no one will ask you why you are here. Think of us when you feel like you’d rather die than go to school on Sept. 1. We offer you refuge.” This message has been retweeted more than 100,000 times and liked by more than 90,000 people.

The library’s message reminded Asahi Shimbun reporter Minao Ota of his struggles as an adolescent. He wrote an essay in Asahi about his experience 26 years ago. When he was 12 years old, Ota had trouble adjusting to a new school. He skipped school on Sept. 1 and instead went to a nearby library every day for a while. Books freed his mind from fear and helped to broaden his intellectual horizons and realize that school is not the only place to learn about life. “I was moved by the library’s message,” wrote Ota. “I would have felt really relieved if I had seen a message like that when I was 12. But my encounters with books and people with different backgrounds and ideas inspired me. They awakened my curiosity and made me decide to become a journalist.”