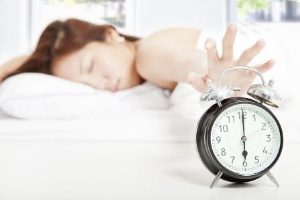 When it comes to gender equality, Japan still has a long way to go. Whether you’re looking at salaries or percentages of politicians, cabinet ministers, and company executives, there are still huge gaps between men and women despite Prime Minister Abe’s efforts to empower women. There is even a gap between Japanese men and women in the number of hours they sleep each night. 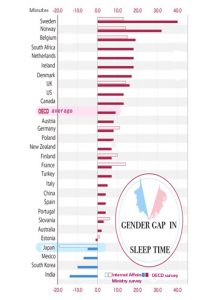 According to an article (9/1) from Yomiuri’s “Ote Komachi” website, Japanese women, particularly those who work, sleep much less on average than Japanese men. You can see from the figure, which is based on separate surveys by the OECD and Japan’s Internal Affairs Ministry, that women in most nations sleep more than men. Out of the 28 nations in the figure, the only nations where women sleep less than men are Japan, Mexico, South Korea, and India. Is it a coincidence that women from such nations as Sweden, Norway, and Belgium, which are always at the top of the list in gender equality rankings, sleep much more than men? Although it is also necessary to consider factors such as climate, environment, race, and social conventions, it does appear that the issue of gender equality is more serious in nations where women sleep less than men.

The article suggests that perhaps Japanese mothers are getting up earlier than anyone else in the family to prepare breakfast and school lunches, take children to daycare in the morning, and put children to bed and do housework before going to sleep at night. Kazuo Mishima, Director of the Department of Psychophysiology, National Institute of Mental Health, National Center of Neurology and Psychiatry, says there is no evidence suggesting a difference in the amount of sleep required for men and women from a scientific viewpoint. This means that social factors have a stronger influence. The article recommends that when we think about gender equality, we should also take into account the gender gap in sleep duration.