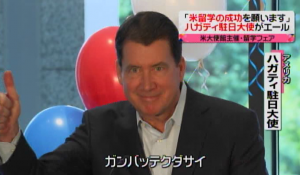 NTV’s “news every” reported on Saturday afternoon that Ambassador Hagerty attended the America EXPO 2017 study abroad fair to promote study in the U.S. The Ambassador offered words of encouragement to students who are considering studying in the U.S. by saying: “It represents the broadest variety and diversity of colleges and universities of any country in the world…. Best of luck in your studying in the United States…. Ganbatte kudasai.” One of the students was quoted as saying: “I came to this event because I really want to study abroad but didn’t know what kind of universities were out there.” The network said a record number of 93 American universities participated in the event this year.