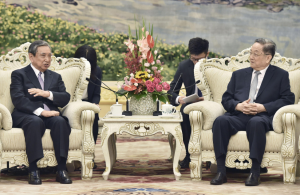 Saturday morning’s Yomiuri and Asahi wrote that China hosted a ceremony at the Great Hall of the People in Beijing on Friday to celebrate the 45th anniversary of the normalization of diplomatic ties with Japan. Some 300 people, including Japanese lawmakers and business leaders, participated in the event. Former House Speaker Yohei Kono and other Japanese guests held talks with Yu Zhengsheng, the fourth-highest ranking leader of the Chinese Communist Party, ahead of the ceremony. Beijing cancelled its 40th anniversary ceremony in 2012 in protest of Japan’s nationalization of the Senkaku Islands, so the reception was the first of its kind in ten years.