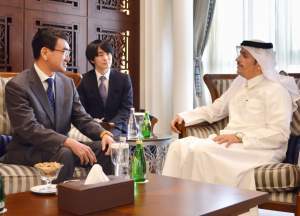 Sunday’s Asahi and Nikkei reported on Foreign Minister Kono’s meeting with his Qatari counterpart on Saturday, during which the Japanese official welcomed the recent telephone conversation between the leaders of Qatar and Saudi Arabia over their diplomatic rift and expressed Tokyo’s readiness to help resolve the issue. Concerning the thousands of North Koreans currently working in Qatar, Kono asked the Middle Eastern country to limit the number of North Korean laborers it accepts in line with UN sanctions resolutions. The Qatari official reportedly responded by saying that his nation is strictly implementing the UN resolutions. Kono told reporters after the meeting that he received a positive response from Qatar on the matter.