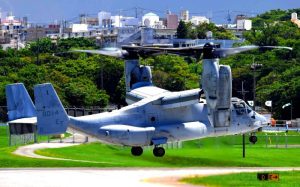 Okinawa Times and Ryukyu Shimpo front-paged reports saying that the MV-22 Osprey that made an emergency landing at Oita Airport on Aug. 29 and underwent repair work there returned to MCAS Futenma on Sept. 9. The aircraft flew from Oita to MCAS Iwakuni on Friday before returning to Okinawa on Saturday. The papers wrote that Okinawa Governor Onaga, Ginowan Mayor Sakima, and other local officials and residents expressed displeasure and concern over the operations of Ospreys, saying that the U.S. military returned the aircraft in question to Futenma without providing a sufficient explanation about the cause and details of the emergency landing.