North Korea has repeatedly conducted nuclear weapons tests and fired missiles. Asked whether the international community should place more emphasis on dialogue or on pressure to persuade the country to cease such acts, some 51% said “pressure,” outnumbering the 38% who said “dialogue.” Meanwhile, 50% of respondents said they “approve” of the summit diplomacy that Prime Minister Shinzo Abe has engaged in to address the North Korea issue, while 37% said they “disapprove.” Some 64% said they are “in favor” of the plan to introduce the ground-based Aegis Ashore missile interception system, whereas 22% said they are “opposed.”

As Liberal Democratic Party (LDP) president, Prime Minister Shinzo Abe said in May that he would like to retain Article 9 of the Constitution, which stipulates Japan’s renunciation of war, and to add a provision to the article to provide grounds for having the Self-Defense Forces. Asked for their views on this, 51% said they are “in favor” (May poll: 53%) while 37% said they are “opposed” (May poll: 35%). Asked for their opinion on the timing for the LDP to submit its constitutional amendment proposals to the Diet, 27% of pollees said “the LDP should submit them to next year’s ordinary Diet session or later” while 26% said “the LDP should submit the proposals to the extraordinary session of the Diet this autumn” and 37% said “there is no need for the LDP to submit proposals.”

Views were split on the Abe cabinet’s economic policies, with 41% saying they “approve” of them and 43% indicating otherwise. Some 66% said “there is no need to rush to dissolve the Lower House and hold a general election,” up 5 points from the August poll.

[Polling methodology: The nationwide survey was conducted Sept. 8–10 on a computer-aided random digit dialing (RDD) basis and targeted voters age 18 or over with calls placed to landline and mobile phone numbers. Valid responses were received from a total of 1,097 persons, including 554 persons (out of the 919 households with one or more eligible voters) for landline numbers and 543 persons (out of the 1,171 persons who answered) for mobile numbers. The valid response rates were 60% for landline numbers and 46% for mobile numbers.] 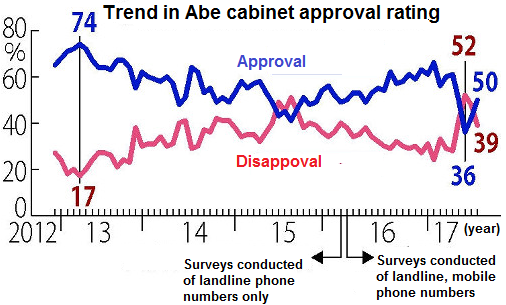