Japanese teachers work some of the longest hours among OECD member countries, but the time they spend teaching is below average, an Organization for Economic Cooperation and Development survey has revealed. 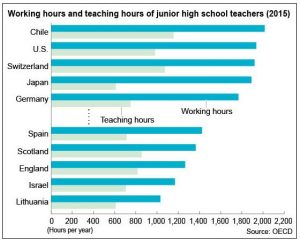 The survey highlights the heavy burden of “non-teaching tasks,” such as meetings with students and parents and extracurricular activities, shouldered by Japanese elementary, junior and senior high school teachers, compared with other countries.

According to the survey, statutory working hours for teachers at public schools in Japan in 2015 are 1,891 per year, 200 hours more than the OECD average.

However, the time Japanese teachers spend on teaching activities is 742 hours at elementary schools, 610 hours at junior high schools and 511 hours at high schools, all below their respective OECD averages.

Teaching time as a percentage of their overall working hours reflects the same trend.

The OECD says Japanese teachers are required to devote much of their time to duties other than classes, such as consultations on education and extracurricular activities, generally sports and cultural club activities.

The survey also noted that more than half of Japanese household expenditure goes on “early childhood education” and “higher education,” one of the highest levels among member countries.

For those households with higher education costs to bear, the proportion is 51 percent, the largest among all members and more than double the survey average of 22 percent.

Tuition fees for higher education in Japan are among the highest, but public support available for students is limited.

Andreas Schleicher, director for the directorate of education and skills, said Japan and South Korea are the only countries among OECD members where public support for students is limited despite their heavy burden of tuition fees.