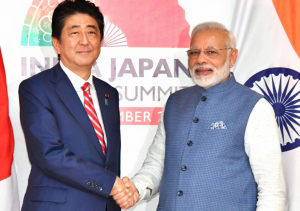 All papers ran extensive front- or inside-page reports on Prime Minister Abe’s talks with his Indian counterpart Modi in Gandhinagar, India, on Thursday. The two leaders issued a joint statement saying that Japan and India will raise their partnership to a higher level by sharing the common values of the rule of law, free trade, and freedom of navigation. The Japanese and Indian leaders also said in the joint statement that they will call on the international community to fully implement the UN Security Council sanctions on North Korea in order to apply maximum pressure on the nation.

Abe and Modi also confirmed the importance of cooperation on maritime security with China’s increasing activities in the East China Sea and the Indian Ocean in mind, and agreed that Japan and India will strengthen their security cooperation through trilateral drills with the U.S. military. On the economic front, Abe pledged to provide about 190 billion yen in loans for high-speed railway and other infrastructure projects in India, and the two nations agreed to conclude an “open skies” agreement and set up a new working group to discuss Japan’s exports of nuclear power technology to India.