According to the opinion poll jointly conducted by the Sankei Shimbun and Fuji News Network (FNN) on Sept. 16–17, the support rate for the Shinzo Abe cabinet was 50.3%, returning to 50% for the first time in four months since May. The support rate was up 6.5 percentage points from the previous poll (conducted Aug. 19–20), and the nonsupport rate was 40.0%, down 9.0 points month-on-month.

Impacted by the Kake Educational Institution scandal and other issues, the cabinet support rate took a dive in the July poll (conducted on July 22–23), reaching its lowest since the launch of the second Abe cabinet in December 2012. The support rate has climbed for the past two months, and this month surpassed the nonsupport rate for the first time in three months.

Support for the Liberal Democratic Party was 38.0%, up 5.0 points from the previous poll. It looks like this will be wind in the sails of Prime Minister Abe, who has decided to move forward with the dissolution of the Lower House.

When the poll asked respondents about the best timing for the dissolution of the Lower House and the calling of a general election, however, only 14.5% said “within the year” while 56.2% said “when the current Lower House members’ terms expire (December 2018) or at a time near that.” Some 14.1% said “around summer next year.”

Asked for their views on amending the Constitution by adding a provision that clearly states the existence of the Self-Defense Forces while leaving untouched the provisions of Article 9 which state that Japan renounces war and will not maintain war potential, some 59.2% of respondents said they are “in favor” of the constitutional amendment, nearly twice the 32.0% who said they are “opposed.”

[Polling methodology: The survey was conducted until the calculated number of responses was obtained by placing telephone calls on a random digit dialing (RDD) basis adjusted to the gender and age composition of each survey area. A total of 1,000 men and women, aged 18 and over, across the nation were surveyed. The survey was conducted on Sept. 16–17, 2017.] 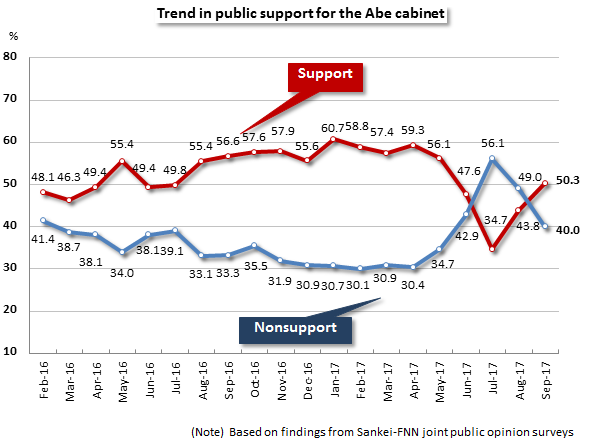