According to the opinion poll jointly conducted by the Sankei Shimbun and Fuji News Network (FNN) [on Sept. 16–17], some 53.8% of respondents think Japan “should possess” the capability to attack enemy bases, including North Korean bases that launch ballistic missiles. Those in favor of Japan gaining this capability exceeded those opposed (38.2%). Prime Minister Shinzo Abe has been cautious about this matter, saying, “There is no plan to consider this issue in a concrete fashion at this time.” It looks, however, like groundwork is being put in place for a full-fledged discussion.

Some 53.7% of respondents are opposed to debating whether or not to revise the Three Non-Nuclear Principles, exceeding the 43.2% who thought Japan should have that discussion. By age group, the older the age group, the more forward-looking they tended to be regarding having such a discussion. Among men, some 51.4% of men age 60 or over said Japan should discuss the question, while only 37.0% of men in their thirties thought so. Some 46.4% of women age 60 or over said Japan should consider the matter, while 31.3% of women in their teens and twenties thought so. Pollees were negative about Japan possessing nuclear weapons, with 79.1% opposed to the idea.

[Polling methodology: The survey was conducted until the calculated number of responses was obtained by placing telephone calls on a random digit dialing (RDD) basis adjusted to the gender and age composition of each survey area. A total of 1,000 men and women, aged 18 and over, across the nation were surveyed. The survey was conducted on Sept. 16–17, 2017.] 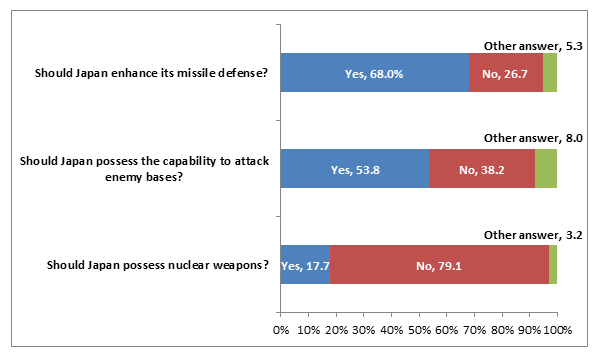