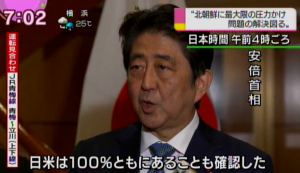 NHK reported this morning on the U.S.-Japan-ROK summit and U.S.-Japan summit held on Thursday, quoting Prime Minister Abe as saying at a press conference held after the meetings: “I had a meeting with President Trump and exchanged candid views on the threat of North Korea…. We also confirmed that the United States and Japan are together one hundred percent. President Trump referred to Megumi Yokota during his speech before the UN and sent a message to the world about the importance of the abduction issue. To resolve the abduction and nuclear and missile program issues we must make North Korea change its policies by imposing maximum pressure on it…. There was also a summit between Japan, the U.S., and South Korea. The three nations will fully cooperate and work closely with the international community to apply the strongest pressure on North Korea to change its policies.” An NHK reporter welcomed the trilateral summit by saying the leaders were able to agree on coordinating their policies in order to impose maximum pressure on the North. Noting that the GOJ was concerned about South Korea’s announcement made ahead of the trilateral summit on its plan to provide humanitarian aid to the North, the reporter said Abe stressed the significance of the summit by saying the ties between Japan, the U.S., and South Korea have strengthened. The NHK reporter also said the leaders of the U.S. and Japan were able to demonstrate close partnership in dealing with North Korea, noting that Abe expressed support for the U.S.’s new unilateral sanctions on the North and appreciation for the President’s reference to the abduction issue during his UN speech.