More than 60% of Japanese business leaders are against Prime Minister Shinzo Abe’s plan to push back a key fiscal-health target, a Nikkei survey shows, indicating a deep wariness toward his commitment to reducing the nation’s heavy debt load.

Abe said Monday he intends to use part of proceeds from an October 2019 consumption tax increase to fund free early childhood education, reassigning revenue originally earmarked for debt reduction. He will dissolve the Diet’s lower house this week for a snap election to seek a mandate for the change.

The Nikkei polled top executives at Japanese businesses about these plans on Monday and Tuesday, with leaders from 99 companies responding.

“The government should set a clear goal and show a determination to reach that goal at any cost,” said Nippon Steel & Sumitomo Metal President Kosei Shindo.

As for diverting revenues from the tax hike, 42.7% of respondents, including those expressing lukewarm support, backed the plan. The most commonly cited reason was the need to invest in talent, cited by 73.2%, followed by support for the prime minister’s goal of building a social safety net that works for all generations, selected by 43.9%. Respondents could choose up to two answers.

“It’s important to turn our social security system, which now centers on benefits to seniors, into one that can also fulfill its obligations to working-age and future generations,” said Kengo Sakurada, president and CEO of insurer Sompo Holdings.

“In order to alleviate concerns about the future, bolstering nursing care, a major cause of public concern, is more important,” said Takeshi Niinami, president of Suntory Holdings.

Of the 24% of respondents indicating some level of opposition to changing the use of the revenue, 82.6% expressed concern that it could delay fiscal consolidation.

As for the snap election, 32% consider the timing appropriate, while 19% disagree to at least some extent. The remaining 49% had no opinion.

Of those in favor, 56.7% called the election an opportunity for Abe to get the public’s stamp of approval, while 40% said they consider it a chance to reassess the social security system. Respondents could choose up to two answers.

Those who said now is not the time often noted a lack of clarity regarding the rationale behind dissolving the lower house and the issues to be debated during the campaign. Some also cited the increasingly tense North Korean situation or the risk of a political vacuum.

The poll offered little to reassure the Abe administration on the wage hikes it has pressed corporate Japan for over the last four years. The vast majority of business leaders surveyed — 83.7% — remain uncertain about whether they will raise employee pay next spring, while just 8.7% said wage increases are on the way. 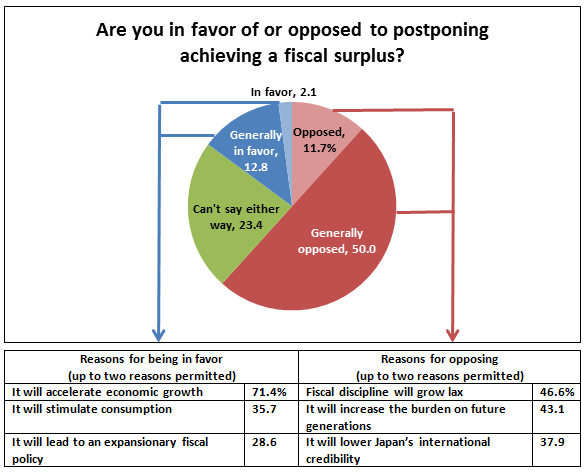