Ahead of the upcoming general election for the House of Representatives, Kyodo News conducted a telephone-based public opinion survey (2nd trend survey) across the nation on Sept. 30–Oct. 1 to probe the trends in public support for political parties. This is the first trend survey conducted since the formation of the Party of Hope led by Tokyo Gov. Yuriko Koike. Prime Minister Shinzo Abe’s Liberal Democratic Party (LDP) had the highest support rating at 24.1%, ahead of the 14.8% who said they would vote for Koike’s Party of Hope in the proportional representation section of the Oct. 22 House of Representatives election. The approval rating for the Abe cabinet dropped to 40.6%, down 4.4 points from the previous survey (conducted Sept. 23–24), while disapproval rate stood at 46.2%.

53% opposed to constitutional amendment under the Abe administration

In the 1st trend survey, 6.2% of respondents expressed support for “the new party created by those close to Tokyo Gov. Yuriko Koike” – as Party of Hope was referred to at that time – saying they would vote for it in the proportional representation section of the Oct. 22 House of Representatives election. Support for the Democratic Party (DP) stood at 8.0% in the 1st trend survey, for a simple two-party total of 14.2%. In the 2nd trend survey, 42.8% of respondents said they were undecided about how they would vote in the proportional representation segment. This hints that the situation may still change.

In the latest survey, the breakdown of pollees indicating they would vote for other parties in the proportional representation segment of the Lower House election was as follows: Komeito, 4.9%; Japanese Communist Party (JCP), 4.9%; Nippon Ishin (Japan Innovation Party), 2.4%; Liberal Party, 0.3%; Social Democratic Party (SDP), 0.1%; Party for Japanese Kokoro, 0.4%.

DP leader Seiji Maehara has decided to effectively disband his struggling party and let its members run on the ticket of Koike’s party. In the survey, 62.3% of respondents disapproved of the decision, easily outnumbering the 28.1% who expressed approval.

A majority of respondents at 53.4% were opposed to amending the Constitution under Prime Minister Abe, while 34.0% were supportive.

A total of 79.5% of respondents said they are either “very” or “somewhat” interested in the Lower House election, up 9.0 points from the previous poll.

Trend survey on the Lower House election: The survey aims to probe changes in voter awareness regarding the Lower House election at certain intervals during the campaign, including the level of voter interest in the election and trends in public support for political parties. This nationwide public opinion survey is conducted by telephone a total of three times using the same basic questions. The same questions are used, but the respondents are different in each survey. 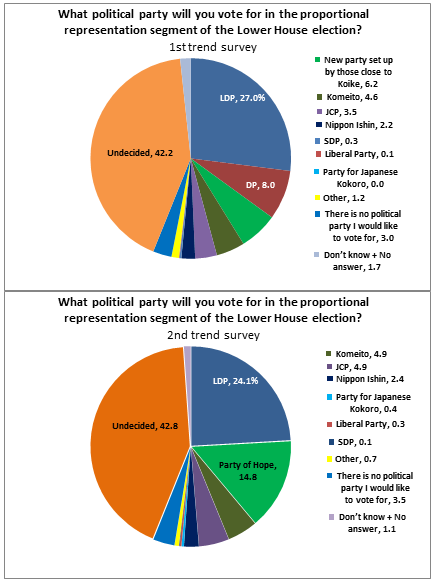