35% say they will vote for LDP, 12% for Party of Hope in Lower House election, Asahi poll

The Asahi Shimbun conducted a nationwide (telephone-based) survey on Oct. 3–4 to probe views on the Lower House election. Respondents were read a list of political parties and asked which political party they would vote for in the proportional representation segment of the Lower House election [if it were held today]. The results were as follows: LDP, 35%; Party of Hope, 12%; Constitutional Democratic Party of Japan (Rikken Minshuto; CDPJ), 7%; Komeito, 7%; Japanese Communist Party (JCP), 6%; Nippon Ishin (Japan Innovation Party), 4%. The voting preferences of independents were as follows: LDP, 17%; Party of Hope, 13%; JCP, 7%; CDPJ, 6%.

Of those not supporting the cabinet, some 22% said they would vote for the Party of Hope in the proportional representation segment of the upcoming election, while 15% said they would back the CDPJ and 12% selected the JCP.

Tokyo Governor and Party of Hope leader Yuriko Koike has announced that her party will not endorse candidates merging with the Party of Hope from the Democratic Party who do not agree with the Party of Hope’s basic policies, including those on security and the Constitution. Some 53% of respondents said that this stance is appropriate, exceeding the 25% who said otherwise. Some 79% said that Koike “should continue as Tokyo governor,” greatly surpassing the 9% who said that she “should run in the Lower House election.”

[Polling methodology: The survey was conducted on Oct. 3–4 on a computer-aided random digit dialing (RDD) basis of voters nationwide with telephone calls placed by pollsters to landline and mobile phone numbers (for landlines, some districts in Fukushima Prefecture were excluded). Valid responses were received from 551 persons (out of 1,074 households found to have one or more eligible voters) for landline numbers and from 582 persons (out of the 1,047 persons found to be eligible voters) for mobile numbers. The valid response rates were 51% for landline numbers and 56% for mobile numbers.] 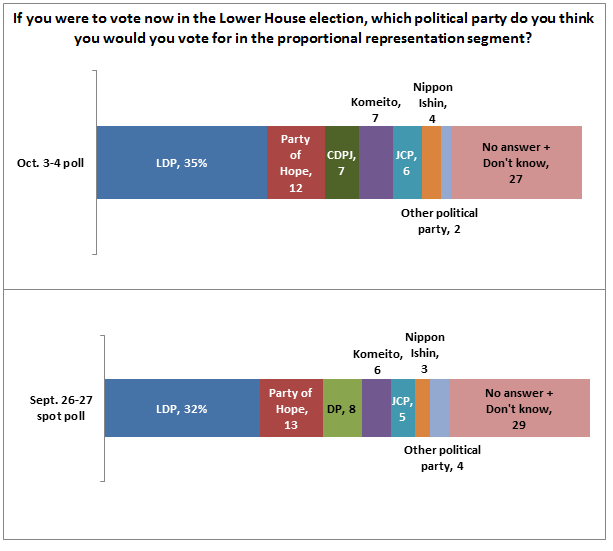 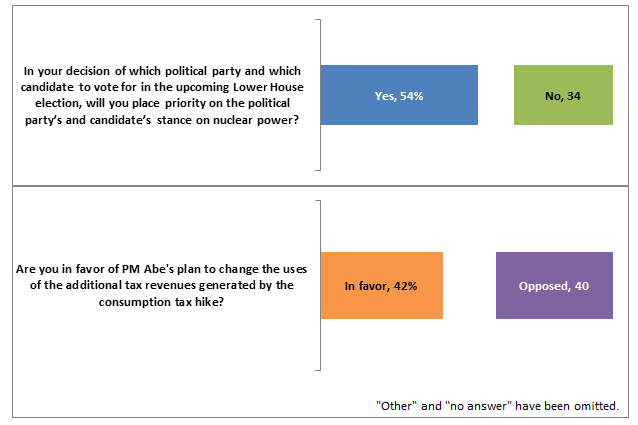