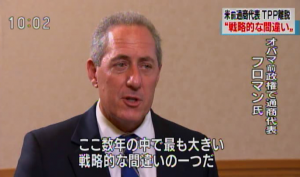 NHK reported this morning on its one-on-one interview with visiting former USTR Froman, who said that the U.S. withdrawal from the TPP was “one of the biggest strategic mistakes” in recent years. “Soon after the U.S. administration withdrew from the TPP, the EU concluded an EPA with Japan,” he added. The network said the former USTR also pointed out that the leadership that the U.S. has exercised over trade policy in the Asia-Pacific region could shift to China as a result of the withdrawal and said that China has very powerful regional strategies such as the One Belt, One Road initiative. On the U.S.-Japan Economic Dialogue slated for next week, Froman reportedly said the United States’ massive trade deficit with Japan over automobiles will be on the agenda as well as agriculture, including beef.