Additional Aegis warship to be deployed in East Asia 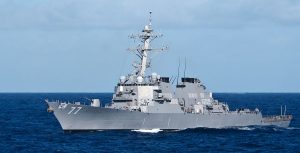 Sunday’s Tokyo Shimbun wrote that a guided-missile destroyer, the USS O’Kane, will be temporarily deployed from its homeport in Hawaii to East Asia and the Indian Ocean, speculating that the deployment is probably meant to assist the 7th Fleet in patrolling the region in preparation for possible missile provocations by North Korea. Two of the 7th Fleet’s Aegis warships are currently out of service due to fatal mishaps earlier this year.