Helicopter that made emergency landing made unscheduled landing in June 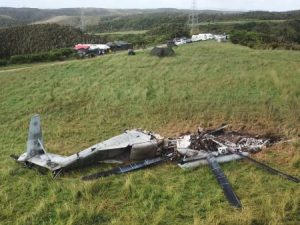 Most Saturday morning papers reported on the finding that the CH-53 helicopter that made an emergency landing near the Northern Training Area on Thursday after catching fire in midair made an unscheduled landing at an airport on Kume Island on June 1 after a warning light came on in the cockpit indicating a malfunction. The aircraft left Kume Island two hours later to return to MCAS Futenma. The U.S. military called the mishap a precautionary landing and did not disclose the nature of the problem.  While noting that it is unclear whether the latest incident was related to the previous mishap, several papers said the finding raises doubts about the effectiveness of the preventive measures put in place by the U.S. military.

Meanwhile, several Sunday papers took up Okinawa Marine Corps’ announcement on Saturday that while the helicopter that crashed contained radioactive material, it was safely removed during recovery operations. Although the Marines did not disclose the details of the radioactive material, it is suspected to be strontium 90, which is apparently used in the indicators for the rotor blades. The Okinawa Defense Bureau checked the accident site for two days for possible radioactive contamination but did not detect any abnormalities.