JAKARTA — The Japanese and Indonesian governments will research a plan to provide power to Indonesian islands through ships that generate electricity using liquefied natural gas (LNG). 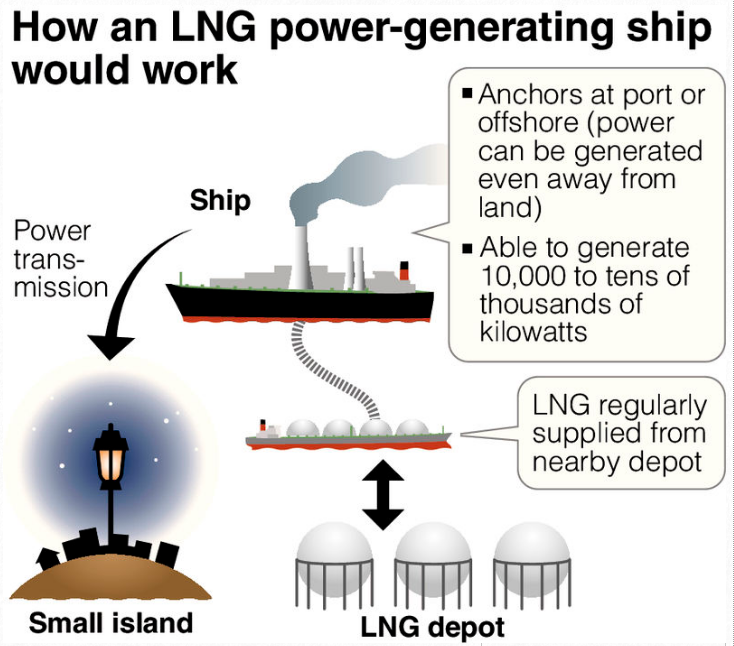 The LNG power-generating ships are advantageous in that they can quickly begin power generation, even beyond the reach of land. The Japanese government anticipates demand from island nations in the Asia-Pacific region and hopes to export the new infrastructure to such countries, sources said.

According to the Economy, Trade and Industry Ministry, this would be the first ever instance of full-scale LNG power generation at sea.

Japan and Indonesia could sign an agreement and create a working group to study the idea in detail as early as Monday, sources said. The goal is to put the idea into practical use within a few years.

Indonesia has more than 13,000 islands. Many smaller islands rely on diesel to generate electricity, which is problematic due to the cost of fuel and emission of greenhouse gases.

The Japanese and Indonesian governments are considering deploying power-generating ships to around a dozen islands in eastern Indonesia that have poorly developed electricity networks, the sources said.

Islands close to East Timor, such as the Maluku Islands, are among the candidate sites.

The ships would be equipped with LNG tanks, power-generating turbines and other equipment. Each would be able to provide a stable electricity supply of 10,000 to several tens of thousands of kilowatts. While a ship is anchored, LNG would be brought by tankers from storage depots in Indonesia.

The working group is expected to include major Japanese companies from industries including gas, power-generation equipment and marine transport, the sources said.

A plan is envisioned whereby Japanese firms and the Indonesian state power company would form a joint venture to sell the electricity.

The total cost of the project is estimated to be ¥200 billion to ¥300 billion. On the Japanese side, funding could come from government-managed financial institutions and other sources.

Japan is the world’s largest importer of LNG and possesses advanced knowledge of power generation and marine transport that could be useful in developing power-generating ships.

The Japanese government is taking on the challenge of developing LNG power-generating ships because it presents an opportunity to expand infrastructure exports in the steadily growing Asian region.

Nations such as Indonesia and the Philippines have many islands that struggle with inadequate power supply.

Expectations are high among those areas for efficient, stable electricity provided by LNG power-generating ships.

The idea could also be a way to counter China’s ambitions to expand its influence in the Asia Pacific region.

China is seeking through its “One Belt, One Road” initiative to create a huge economic bloc.

As part of this, it is backing infrastructure improvements in areas such as power stations and transportation networks.

While Japan may not be able to compete with China on price or speed, it can provide the latest means of efficient electricity generation, which would contribute to other nations’ economies.

The shale gas boom in the United States and other factors have increased global production of LNG.

If Japanese companies can succeed in Indonesia, it could expand opportunities in the global market.